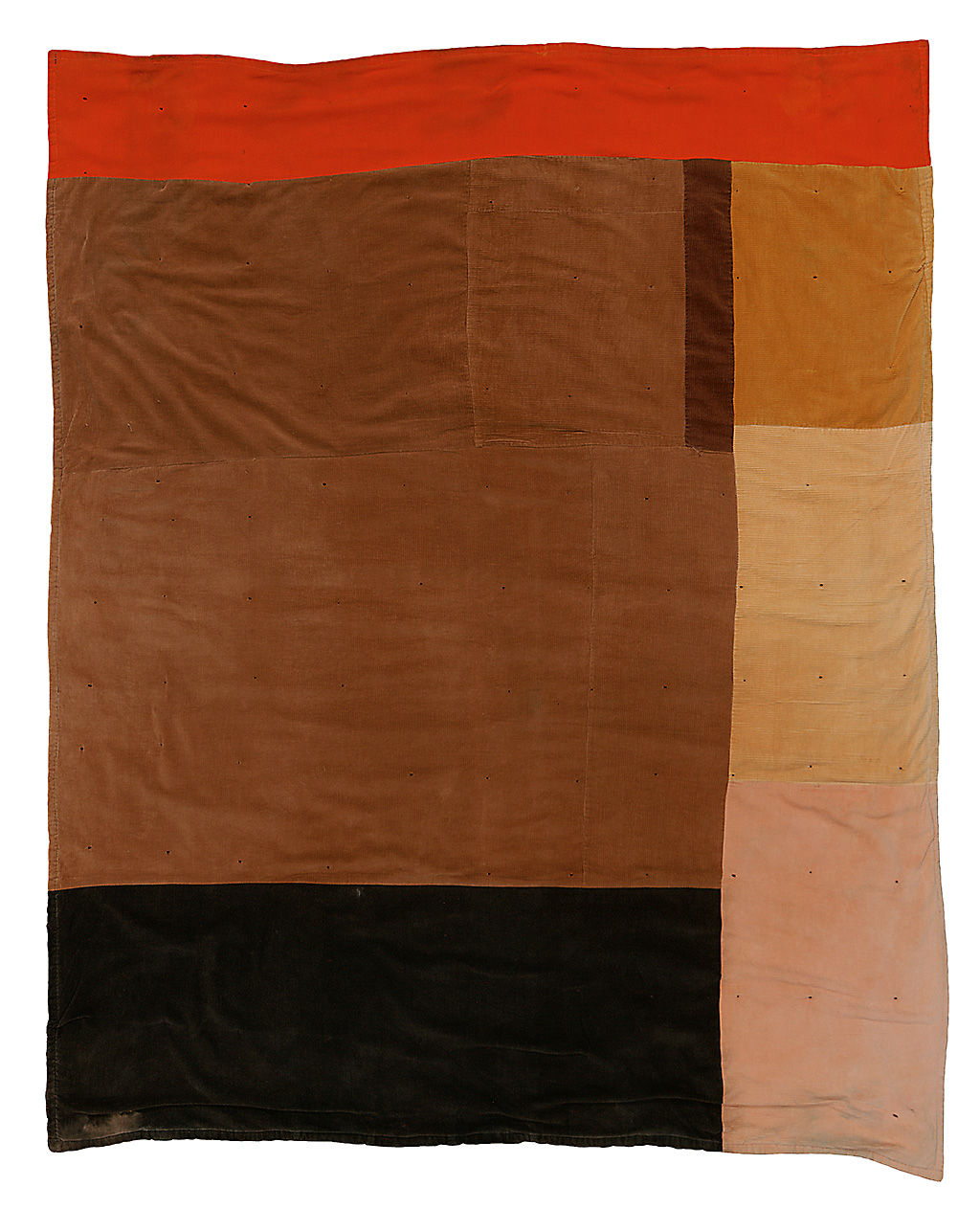 I’ve only recently discovered the work of the wonderful Gee’s Bend Quiltmakers (also here and here). These quilts have been created by generations of women in the isolated African-American hamlet of Gee’s Bend, in rural South West Alabama. The earliest identified quilt maker was Dinah Miller in 1859. Throughout the post-civil war years and into the 20th century, the women of Gee’s Bend made their quilts from scrap materials such as old shirts, overalls, aprons and dress bottoms. They did this from necessity not art. Even now the average income is less than $10,000 and these quilts were needed to keep themselves and their children warm in unheated shacks that lacked running water, telephones and electricity.

Gee’s Bend is very isolated. Until the 1960s there was a primitive ferry which reduced the journey time significantly. However, when black residents of Gee’s Bend began taking the ferry to the county seat at Camden to try to register to vote the local authorities reacted by closing the ferry service.

The shutdown of the 15-minute ferry ride forced the residents of Gee’s Bend to drive, if indeed they had a car, 40 miles over narrow rural roads to get to the county courthouse in Camden, then 40 miles back. They would be without a ferry service for over forty years. Even when federal funding was agreed in the 1990s it still took until 2006 before it reopened. Such enforced isolation made already hard times even harder.

From the 1960s onward, the opening of the Freedom Quilting Bee in nearby Alberta, which had many from Gee’s Bend as members, began to generate increased attention, although the aim of the Quilting Bee was to meet commercial contracts for the likes of Sears, not sell the work of individual quilters. It took until the late 1990s to generate real interest after art collector, historian, and curator William Arnett began to buy quilts from Gee’s Bend makers.

Arnett organized an exhibition called, “The Quilts of Gee’s Bend” at the Museum of Fine Arts in Houston. This later travelled to a dozen other locations across the USA. The exhibition featured sixty quilts created by forty-five artists. When it reached New York, one critic rather gushingly described the quilts as “some of the most miraculous works of modern art America has produced. Imagine Matisse and Klee (if you think I’m wildly exaggerating, see the show), arising not from rarefied Europe, but from the caramel soil of the rural South.” In 2006, the US Post Office issued a set of stamps to commemorate their work, but without giving individual credits.

While this exhibition brought fame to the quilts, Arnett’s relationship with the quilters was troubled and in 2007, two of them filed lawsuits alleging they had been cheated out of thousands of dollars from the sales of their quilts. The lawsuit was resolved and dismissed without comment from lawyers on either side in 2008. From the outside it is hard to work out what really happened, but it seems that the issue is in part the nature of the art market, where pieces travel from dealer to dealer at ever inflated prices.

Despite the controversy, the Souls Grown Deep Foundation, created by Arnett, continues to collect and organize exhibitions for Gees Bend Quilts. It is also managing multiple campaigns to support the quiltmakers and African-American artists in general. They aim to provide documentation, marketing, and fund-raising, as well as education and opportunity for quiltmakers. The foundation is also involved in a multi-year campaign with the Artists Rights Society to protect intellectual property rights for the artists of Gee’s Bend. Some of the quilters have been selling on Etsy for a while, but from February they are creating their own brand presence.   Sadly, but not unexpectedly, the site is however already overrun with knockoffs and attempts to cash in on the name. The domain name geesbendquilts[dot]com appears to have been hijacked by someone in Indonesia.

The work of the women of Gee’s Bend raises many questions about the nature of art, challenging as it does the mainstream view that art is made by people who call themselves artists. The utilitarian nature of these quilts is married with a real aesthetic sense that has created objects of great beauty which are indeed art. In achieving that state, they need no validation by comparisons to Klee or Matisse or any other artists. Nor are they ‘outsider art’ except from the perspective of those who wish to control the cultural narrative. They are not ‘naïve’ or ‘folk’ art – their artistic decisions are just as sophisticated as those of the artists with which they are compared.

The community of Gee’s Bend are just as much an artistic community as places like St Ives. Even more so perhaps, since their art genuinely springs from the community and continues through the generations. Reading various interviews with the quilters it looks as if they are finally being recognised as individual artists and the money generated is finally beginning to have an impact locally. The Gee’s Bend Quilting Collective currently has 50 members, working as ever to make each quilt unique. Two members (China and Mary Ann Pettway) now run quilting retreats, passing on their skills to quilters and makers across America.

I would love to list all the artist’s names, but I haven’t been able to find a definitive list. The list of quilters on the Souls Grown Deep website numbers 120 but over the generations there must have been many more whose names are now lost to us. The list below is drawn from the Foundation website and is based on the works acquired by Arnett and then held by the Souls Grown Deep Foundation.

I have already posted the ‘basic’ version of this, (here) which is available in an edition of five. This is a one-off experiment in printing over prepared paper, in this case washes of acrylic paint plus some acrylic ink. I suppose this makes it a monotype – or perhaps it is mixed media?

Drypoint on hand-made paper. Inspired by the notebooks of Paul Klee.

Edition of five, initialed in the plate and signed and numbered on the face.

A one-off version printed on prepared paper is here.