Last year I joined with a group of other artist printmakers who share the same workshop space to form Wiltshire Print Creatives, an informal collective. We had our first group show in November at 44AD Artspace in Bath. We were very pleased with the reception we got and sold quite well, so we are now firming things up to create a more coherent presence with a web site and social media. You can already find us on Twitter and get an informal peak behind the scenes but we intend to ramp this up over the next few months and probably add other social media platforms like Instagram.

We also have a couple of further shows lined up – more later – but are still looking for new opportunities and venues, especially where we might be able to establish a more permanent presence. 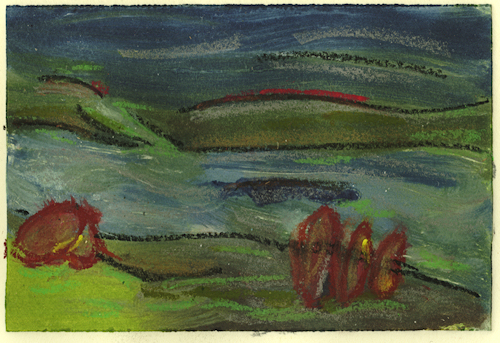 Because I couldn’t stand at the press for quite a while (see the previous post for why), I also made some small collage pieces. These have no particular theme, they are just playing with the medium.

This link to an Etsy search on ‘mixed media collage’ also brings up some other items including a number from my ‘Made to Music’ series (£15 for unmatted, £30 matted – see the listing for full details – and making me realise that I’ve worked this way on several occasions.

I have another series called ‘Around Avebury’, which has yet to be added to the Etsy shop. These are all in handmade oak frames. You can find these on my Portfolio Pages.