I’ve referred before, probably more than once, and certainly in the About section, to an idea I have for works based on descriptions of the Martian landscape in Kim Stanley Robinson’s series of books about the colonisation of Mars. I’m still mulling over ideas and collecting visual references. This post though is about the inspiration, not the art. I’ve been reading science fiction since I was about twelve years old, so it is unsurprising that I find inspiration for my art there.

I already had paper versions of the books and made notes, but to make things simpler I also bought the Kindle edition. Using the notes function, I generated a text file of quotes that inspired me. I can’t publish that here in its entirety. Apart from copyright issues, there are 19 pages! Here though is a selection, plus some images from my ‘mood board’ of visual references, which together I hope will give some sense of why I find this idea so compelling. The extracts are all taken from:

The sky was now a deep violet, streaked by yellow cirrus clouds.

The depth of Valles Marineris was perceptible, the height of the four big volcanoes obvious: their broad peaks appeared over the horizon well before the surrounding countryside came into view. There were craters everywhere on the surface: their round interiors were a vivid sandy orange, a slightly lighter color than the surrounding countryside. Dust, presumably. The short rugged curved mountain ranges were darker than the surrounding countryside, a rust color broken by black shadows. But both the light and dark colors were just a shade away from the omnipresent rusty- orangish- red, which was the color of every peak, crater, canyon, dune, and even the curved slice of the dust- filled atmosphere, visible high above the bright curve of the planet.

Their wheel tracks stretched behind them like the first cut of a lawnmower through grass, and the transponders gleamed bright and incongruous among the rocks.

They stood and watched the sun set. Their shadows went right out to the eastern horizon. The sky was a dark red, murky and opaque, only slightly lighter in the west over the sun. The clouds Ann had mentioned were bright yellow streaks, very high in the sky. Something in the sand caught at the light, and the dunes were distinctly purplish. The sun was a little gold button, and above it shone two evening stars: Venus, and the Earth. “They’ve been getting closer every night lately,” Ann said softly. “The conjunction should be really brilliant.” The sun touched the horizon, and the dune crests faded to shadow. The little button sun sank under the black line to the west. Now the sky was a maroon dome, the high clouds the pink of moss campion. Stars were popping out everywhere, and the maroon sky shifted to a vivid dark violet, an electric color that was picked up by the dune crests, so that it seemed crescents of liquid twilight lay across the black plain.

They flew over the westernmost of these crack systems, Hephaestus Fossae, and found the area an unearthly sight: five long deep parallel canyons, like claw marks in the bedrock. Elysium loomed beyond, a saddleback in shape, Elysium Mons and Hecates Tholus rearing at each end of a long spine range, five thousand meters higher than the bulge they punctuated: an awesome sight. Everything about Elysium was so much bigger than anything Nadia and Arkady had seen so far that as the dirigible floated toward the range, the two were speechless for minutes at a time. They sat in their seats, watching it all float slowly toward them. When they did speak, it was just thinking aloud: “Looks like the Karakoram,” Arkady said. “Desert Himalayas. Except these are so simple. Those volcanoes look like Fuji. Maybe people will hike up them

Candor Chasma, and now it was as if he were in a gigantic replica of the Painted Desert, with great deposition layers everywhere, bands of purple and yellow sediment, orange dunes, red erratics, pink sands, indigo gullies; truly a fantastic, extravagant landscape, disorienting to the eye because all the wild colors made it hard to figure out what was what, and how big it was, and how far away. Giant plateaus that seemed about to block his way would turn out to be curving strata on a distant cliff; small boulders next to the transponders would turn out to be enormous mesas half a day’s drive away. And in the sunset light all the colors blazed, the whole Martian spectrum revealed and blazing as if color was bursting out of the rock, everything from pale yellow to dark bruised purple. Candor Chasma!

Although the inspiration is Mars, and the quotes are from Science Fiction, I’m not planning these images as Science Fiction illustrations. It isn’t my area, and there are dozens if not hundreds of artists who have been there before me. I’m thinking of this project as a set of landscapes, probably as prints, but I may yet attempt some paintings, who knows?

I do know of one current painter who has looked at Mars as a subject for landscape painting, artist Tina Mammoser. You can find her work here.

I was especially taken though by the images in this blog post looking at the Martian aurora.

For anyone interested in the topic though, the first name that comes to mind is Chesley Bonestell. Bonestell (1888-1986) was an American pioneer of space art who helped popularize manned space travel. He is well known for his cover art for science fiction magazines, including Astounding Science Fiction and The Magazine of Fantasy and Science Fiction as well as many books such as The Conquest of Space, The Exploration of Mars, and Beyond the Solar System in collaboration with several authors well known in the field of space exploration.

Why do we spend time looking at the work of others? I assume you do, but why? As importantly, who?

So, this is the first of an irregular series on artists, in no particular order. If possible I try to see the work in the flesh, but this isn’t always possible, so I tend to buy a lot of artist books – not how to’s, but monographs, exhibition catalogues, catalogue raisonee if I can afford them.

I recognised the name, John Hoyland, when I saw it somewhere but couldn’t picture the work, so I did a bit of online research. My first reaction was Patrick Heron on acid. The paintings boil with energy and colour. I haven’t had the chance to look much at his prints. The book I have is ‘Scatter the Devils‘ by Andrew Lambirth. There are also two books by the late Mel Gooding which I would like to get sometime. My first impression still stands, but not because of any direct link between the two. It is probably more a case of common ancestors in the Abstract Expressionists.

Looking at his work, what I think I got most of all from it was a vastly enlarged sense of what is possible in art. I do wonder if Hoyland would take quite the same view, for example, of the random marks I was talking about in this earlier post. Would he celebrate the accident that created them, or remove them as distractions? I’m not sure myself now…

A footnote: Why is there no wikipedia page on Mel Gooding? Surely he deserves it?

I have started on a site update. The About page has already been rewritten, and the main menu has been rearranged slightly. My next step is to review the shop structure and of course add more content to it. Once that is completed, I will be adding some internal links to help with navigation of the site. If you find any problems, please let me know.

That’s it really. I have closed both my Etsy shops, probably permanently. I think I have disabled all the links, but if you get a broken link from one of the posts, I would be grateful if you let me know.

After my last blog post, in which I concluded the answer was effectively – nothing- it was heartening to see this interview with Gillian Ayres on YouTube where, in the opening minutes she says much the same thing.

As I continue to add new items to the shop, I’ve taken to including in the item description a brief explanation of the title. In connection with the ‘Lockdown Series’ of monotypes this is sometimes difficult. Naming a piece of abstract art is never easy and may well end up saying more about the artist than the art! Humans appear to have strong pattern matching instincts. We see shapes and can’t help trying to make sense of them. There is even a scientific term for it – pareidolia. It isn’t surprising then that abstract paintings and prints fall victim to the same tendency. Any meaning in abstract art has to be put there – usually by the viewer, not the artist.

Several things spring to mind from this.

First, just because you see something in an abstract image, that doesn’t mean it is the result of deliberate intent.

Third, just because an artist gives an abstract image a title suggestive of something in the real world, that doesn’t mean it is actually in the picture.

For example take one of my favourite artists, Gillian Ayres. Many of her paintings only got a title after she finished it. Sometimes she even asked friends to suggest titles. These titles almost never describe what the painting is about. Instead, they seem to reflect how the artwork made her feel and what that reminded her of. Gillian Ayres said you don’t need to understand her art to like it. She just wanted you to look at it. I found many similar quotes from Mark Rothko.

There is a wider point here. There is no meaning in abstract art. It does not require understanding. It just is. A Renaissance painting, with its richly symbolic visual language has much more intrinsic meaning than say a painting by Jackson Pollock. If an artist attaches personal meanings to the shapes and colours of an abstract painting, they must either share those meanings or accept that others will attach their own and, going back to our starting point, see different things. 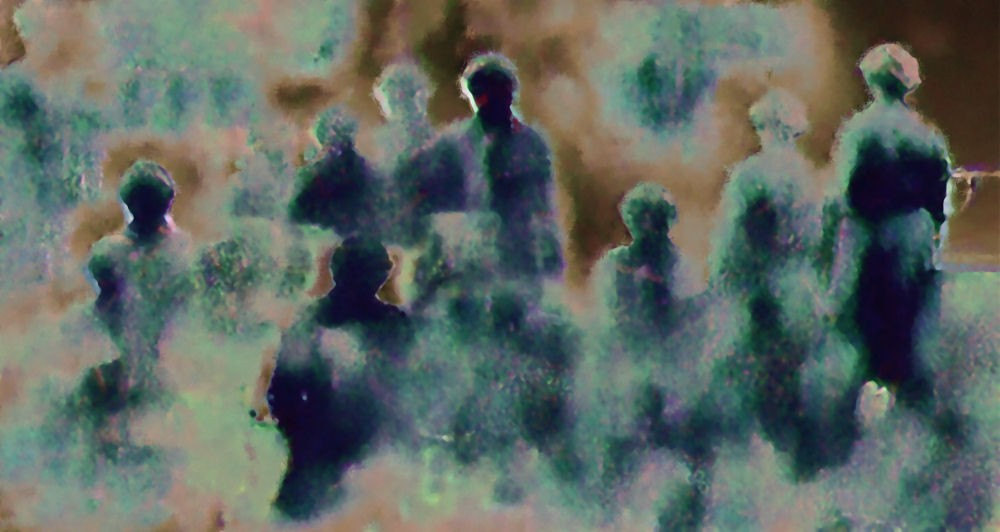 There’s a link via the menu, so this is just a reminder.

If you sign up to my mailing list you will get notifications of any shows or galleries where you can see my work in the flesh and advance notice of new projects. From time to time I will be offering subscribers discounts on purchases from my shop or other special offers. I will also use it to give subscribers a foretaste of the novel I’m working on. So, if you want to be kept up to date, please sign up.

Inspiring video about Eunice Parsons collage artist. Eunice was 90 when this was made, (with better knees than I do !) and apparently still going now.