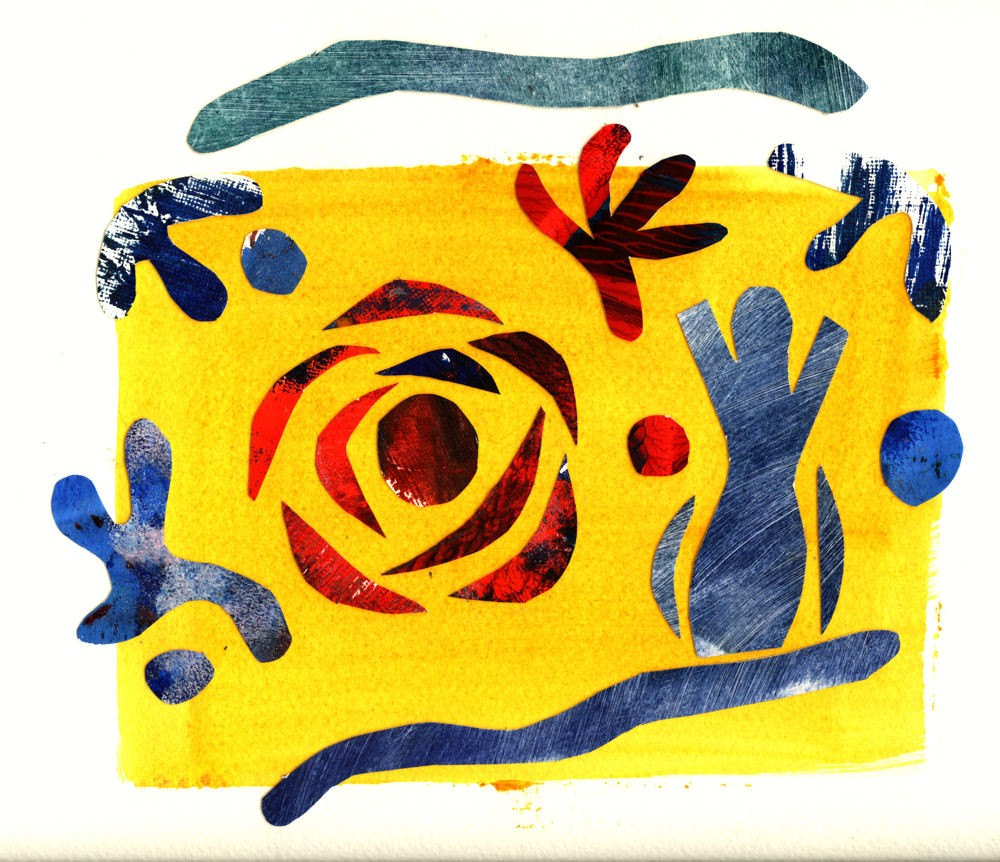 I’m slowly starting to add items to the shop. I’m doing this slowly to make sure I have everything set up correctly. I’m aiming to make it possible to browse by medium, price, subject and size. I’ve added the last because I know sometimes thought how a little corner of a room would benefit from just the right piece of art and I can’t be alone.

I’m also working on setting up Virtual Exhibitions from time to time. My next real time show is not until May 2021 and who knows what will happen between now and then? For the moment this will just be a custom selection on the Shop Page but I’ve seen some wonderful examples since lock down using Virtual Reality so I’m looking into that too.

The featured image is called The Moon Goddess and the Sun. It is a collage made several years ago with prepared papers over a colour wash on watercolour paper. I had it framed for myself, but it will soon be added to the shop. The frame is very heavy solid wood so it will probably be added to the shop minus the frame. 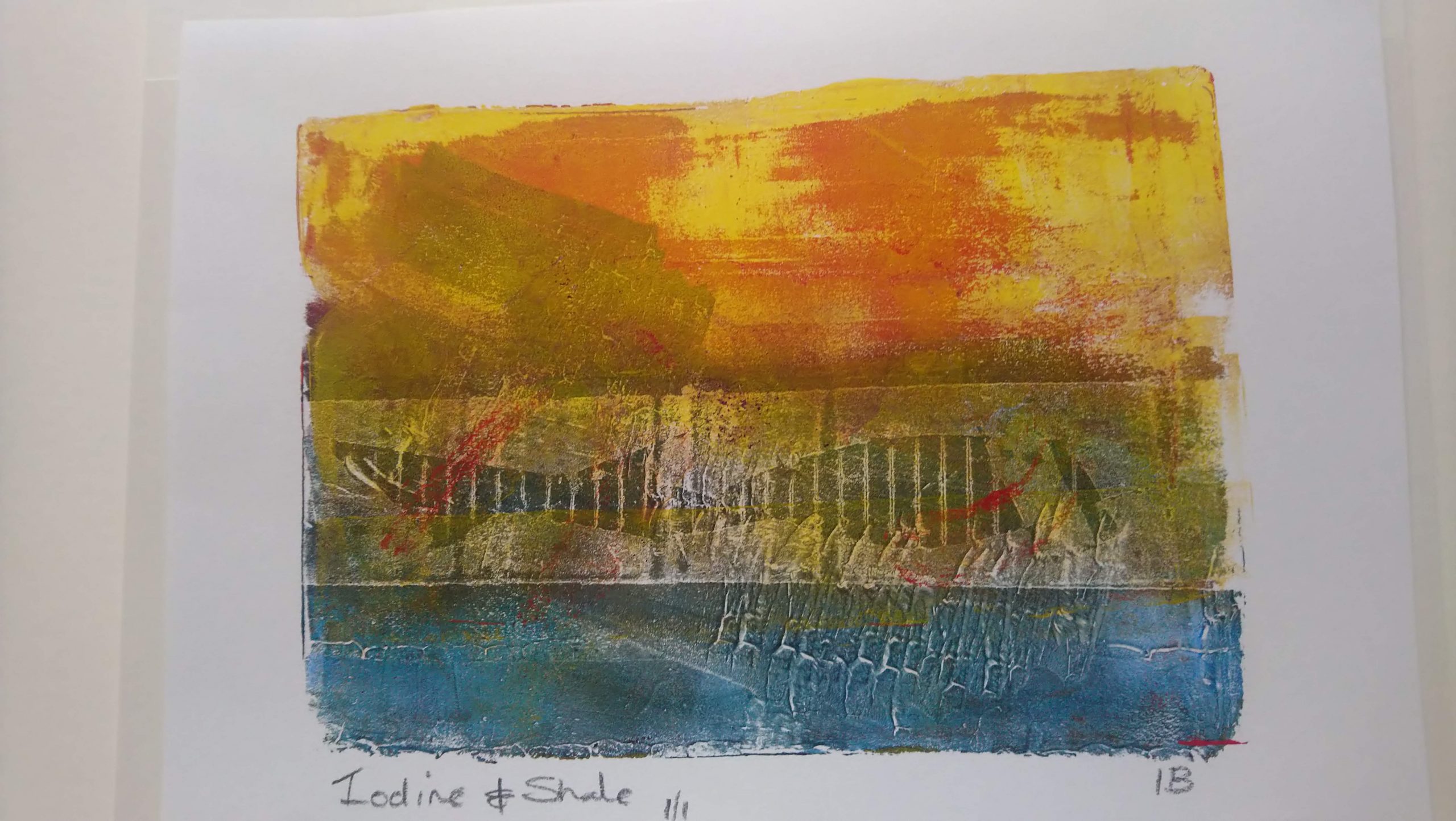 I’ve added another page to my Portfolio Pages here with examples of some Gel Prints. I’ve also been using the prints made this way as elements for collage. I’ve always liked collage, ever since I came across the work of Max Ernst and Kurt Schwitters in my teens, too many years ago.

Finally here’s another one from some time ago, using prepared papers again, but this time by monoprinting on paper smaller than the plate, so taking the colour to the edges. I originally intended this to be overprinted with a drypoint, but I haven’t taken the plunge yet… 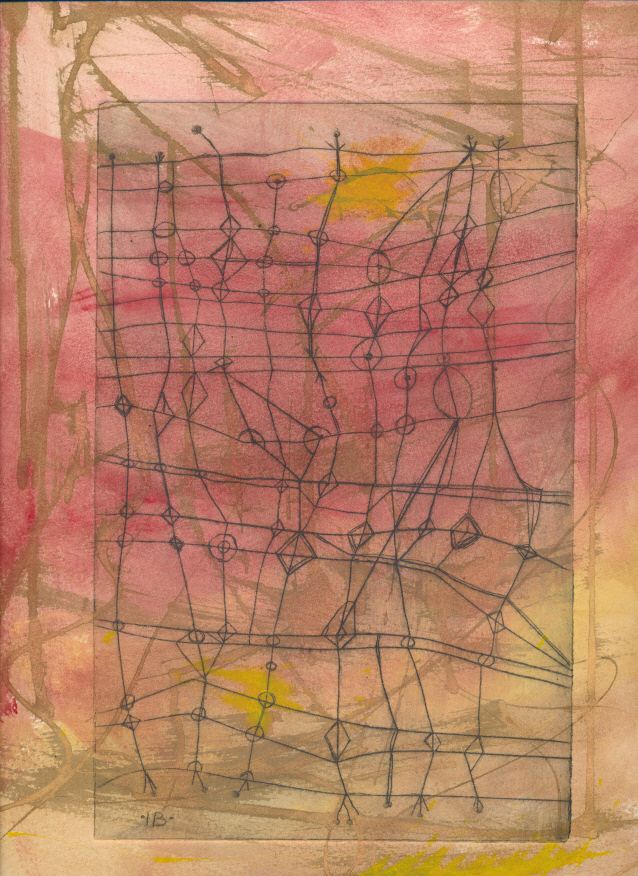 I’ve been looking at this series of paintings and prints by Richard Diebenkorn (via this book, but also here.) There is something about them that keeps drawing me back. They are deceptively simple with subdued colours, apparently just variations on geometric subdivisions of a rectangle. This makes them seem akin to Mondrian, but they have much more depth to them. They clearly owe much to Klee, but also to de Kooning, at least in terms of colour values. In the end though they are themselves and stand on their own merits.

When I was at school, studying maths we were always told to ‘show your workings’ and in many ways that’s what is going on with the Ocean Park paintings. Variations, second thoughts have been painted over, but their ghosts remain.

I think this is part of their appeal to me, since I’ve always been intrigued by the idea of palimpsest, even before I became an artist. Both the urban and rural landscapes of Britain can be viewed as archaeological palimpsests. Take the time to look around any British town or city you will find signs of previous activities. The street pattern in many Northern industrial towns can often be mapped against ancient field boundaries, while alignments going back into pre-history may still be seen. (http://locateit.leeds.gov.uk/CharacterOfLeeds/UrbanHistory.aspx?p=3) Beneath the streets archaeological investigation and civil engineering projects alike reveal layer after layer of activity. (http://www.crossrail.co.uk/sustainability/archaeology). The same applies in the wider landscape. Anyone familiar with Britain, will read into these paintings the pattern of fields, woods and lakes which almost define the English landscape. That landscape is almost entirely man made, even in the supposed wild areas like Dartmoor or the Scottish Highlands and has developed out of complex and cumulative processes of human intervention.

So just as imperfections and variations disturb the surface of the modern world, revealing its past to those who look, so the Ocean Park paintings reflect the process of their creation, revealing the changes made and to my mind, humanising their geometrical abstraction.

I’ll come back to this another time with images from prints inspired to a degree by Klee and Diebenkorn, and also to some new work I’m planning which will attempt to marry the geometry of this work to another interest of mine, the rock carvings and standing stones of the Neolithic era. Here’s some tasters with a couple of trail proofs.

I haven’t been very good at posting here have I? That’s partly down to my lack of anything to show, but mostly just inertia…

These two are however work in progress. Strange Fruit (on left) is inspired by the song of that name, sung here by the incomparable Billie Holiday.

This is the best pull so far, but I’m not satisfied. Because it is a drypoint on acrylic, I won’t get many more, so the edition when I make it will be no more than 5-10.

The second image, as yet untitled, is pretty close to my visualisation of it. The greys are a bit dark, and some unsightly blotches of white have appeared at the bottom, but otherwise close enough to be considered as the AP (Artist’s Proof). The brown tone at the top, outside the image is just a colour cast in the phone photo, The paper for both of these is Fabriano and is white. 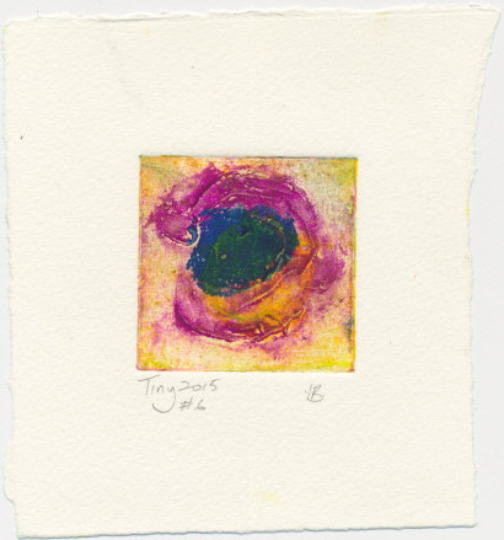 I recently realised that purely by chance I have in 2014 and 2015 made two series of tiny prints. In both cases they came about as a way to get back into making some work after illness. Looking back at the work produced it seems though, that they also have some merit in their own right, not just as occupational therapy. I’ve decided therefore to make a 2016 series.

The mainly ochre & blue print above is from 2014. It came about by chance. I used to clean up my palette after painting in acrylics by pressing a sheet of paper across it. I liked the effects so started using watercolour paper. Some years later, turning up these sheets I decided to cut them up into smaller squares with the idea of rearranging them squares into a mosaic collage. However my cutting up wasn’t very precise so that didn’t work and I was left with lots of poorly cut squares. About then I was taking a stand at an Art Boot Sale and wanted to boost my stock with some affordable items and decided to use these pieces. I ordered some 6″ x 6″ mounts with a square aperture about 2″ x 2″ (from Cotswold Mounts – highly recommended) and quickly created about 30 tiny prints. These proved very successful on the day and I sold almost half of those I had taken with me.

As an aside, when writing this post, I realised that another influence had been sitting in front of me for a few years. This is a tiny painting I acquired from artist Leslie Avon Miller back in 2009.

Moving on to 2015, I acquired a set of samples of mountboard, which I had no use for, since it is very rare that I use a mount colour other than an off-white. Taking inspiration from the images below, I used these small squares of card to create collagraph plates.

The prints above were an experiment in capturing some of the feel of the painter’s brush stroke in a print. I only made four, (I really should get back to them sometime) but with them in mind about 30 small square plates. I made some monochrome proofs on a single sheet, then set about printing. I used the plates singly and in combination, although I soon found that more than two plates usually created a mess.

You can see all the prints in the two series currently in my Etsy shop here:

At the time of writing, there are still more to add in both series.

So, what about 2016? I haven’t finally decided yet, but have two options I’m considering. Option one (provisional title Geometries) is a set of small plates I’ve made (about A7 in size) to be printed on Khadi paper.  Option two (provisional title Serendipity) will take a different approach and will involve printing on business card size sheets, also from khadi, but using plates larger than the paper so printing right to the edge. I’m leaning to the latter since I am thinking of these series of tiny prints as a way to experiment rather than just to produce inexpensive pieces.